After appearing on classic albums by UFO, Hawkwind and Pink Floyd, one of the UK’s biggest rock stars is calling it a day. The name might not be familiar, but this legendary icon’s contributions to rock music are surely familiar to just about anyone who owned a turntable in the 1970’s.

The Battersea Power Station is located on the South Bank of the River Thames, in the Battersea District of South West London. This coal burning power plant is actually 2 identical buildings; Station A, built in the 1930’s, and Sation B in the 1950’s. The station stopped producing power in 1983, but has nonetheless become one of the most popular landmarks in London and one of the most recognizable buildings in the world. Since its decomission, investors have sought to make the building into a theme park, a stadium, and even another, more modern power station. Since 2012, the site has been under development as a giant mall, with residential apartments and townhouses, and opened these rental untis to the public on May 1st of this year. Thankfully, the British government required all bidders on the 39-acre site to include the 4 iconic chimneys in their redevelopment plans, thus retaining the buildings’ iconic look and national landmark status.

So how does the largest brick building in Europe become a rock star? Pink Floyd’s Roger Waters lived near Battersea in the 70’s, and those famous chimneys constantly loomed as part of his local skyline. When the Floyd needed an image to communicate the ideas found on their upcoming ‘Animals’ album, Waters thought the coal burning, smoke spewing power station, which was then within a few years of outliving it’s usefulness, would be an effective way of communicating the record’s concept. Loosely based on George Orwell’s ‘Animal Farm’, the album’s theme centered on the UK’s outmoded class system hierarchy. The pig floating between two chimneys sealed it, a mocking symbol of corruption hovering majestically between two of Battersea’s towering chimneys, as they belch black smoke into the sky. The image perfectly encapsulated Waters’ view of Britiain’s class system and the societal and moral decay he felt it produced.

‘Animals’ was released in January of 1977. Today it is acknowledged as Pink Floyd’s reaction to the burgeoning Punk Rock movement, an attempt to tackle some of the same ideas and concepts so vociferously explored by punk music. Battersea provided Floyd with an iconic image (created by the legendary Hipgnosis graphics group) that helped the record achieve 4x Platinum status, which in turn helped make Battersea one of the most recognizable buildings in the world.

Next up for Battersea was an appearance on the cover of UFO’s ‘Lights Out’ album in May of ’77. Hipgnosis once again looked to our favorite power station for an image to communicate another Punk Rock-inspired idea: Who controls the ‘power’, and what happens after the ‘power’ goes out and no one is looking? And where better to question the goings on along the corridors of power than… along the corridors of power?

‘Lights Out’ was not a concept album, but the lyric to the title track, with its artful allusions to the bombing of Britian during WWII, deals with such themes as war in the streets and a forced toppling of the status quo, a perfect description of what was going on in the UK’s music scene in 1976/77. Battersea provided the backdrop for an image of power station workers, ie those who control the power, disrobing while on the job, clearly up to something other than their work. It’s a subtle but striking graphic representation of the abuse of power.

In June of 1977, Hawkwind released their seventh studio album, ‘Quark Strangeness and Charm’. To many, the psychedlic Space Rock of Hawkwind, with it’s sci-fi lyrics and hippie jam band musical aesthetic, may have seemed immune to the siezmic shifts in rock music caused by the birth of Punk Rock. But the hippies shared with the punks a major imperative: ‘Question Authority’. Hawkwind had also shared members with UK proto-punks The Pink Fairies, so the self-appointed Psychadelic Warlords were a lot closer to the punk rock fray than most rock fans realized. In a timely attempt to underscore Hawkwind’s connection to punk’s ideals, Hipgnosis staged the image to illustrate the band’s political stance, and shot the cover to ‘Quark’ in one of the control rooms at Battersea. 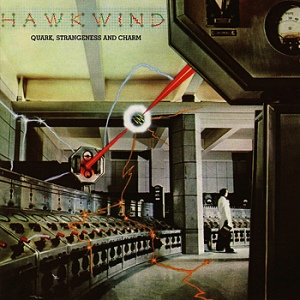 The image is set in the enterior of a high-tech control room, and depicts two machines interacting together, with dangerous-looking results; lightning and laser light are arcing into the nearby control panels, while a portal of some sort seems to be opening between them. The lab-coated human in the picture looks the other way, completely oblivious to the activity behind him. The back cover features a close-up of the ‘face’ of one of the machines, while behind and to the left, the human technician is shown to be asleep in a chair with paperwork covering his face. This artwork brilliantly captures the essence of Hawkwind’s underground philosophy: Let’s change the world while ‘The Man’ isn’t looking. It’s another compelling image with a charged political message, depicting those in control asleep at the switch.

In the first 6 months of 1977, as the Punk Rock apocalypse poked, prodded and outright threatened more established rock acts, three major British bands rose to the challenge, and looked to the artists at Hipgnosis to graphically express their responses. Hipgnosis, in turn, found their go-to symbol to represent power, authority, and control; the perfect setting to stage three chilling tableaus of corruption, abuse and moral decay: the brick and wrought iron fortress known as the Battersea Power Station.

From coal-fired electric power plant to unlikely rock star to metrpolitian shopping mall. There’s a concept album in there somewhere.