Have you ever found yourself wishing Black Sabbath broke up after ‘Never Say Die’? ‘Live Evil’, maybe? Daydreamed of a world in which ‘Music from the Edler’ never happened? If time travel were possible, I know the first two things I would use it for would be to a) kill baby Hitler and b) prevent ELP from recording ‘Love Beach’. My point is that some bands just oughtta have expiration dates. Didn’t someone once sing ‘Hope I die before I get old’? And didn’t he mean that shit?

We can blame the Rolling Stones, I guess, for continuing to record and perform into their 70’s and showing rock n rollers everywhere that if you can still deliver the goods, and if you’ve still got something valid to say, then there’s no reason to stop. But those are two pretty big ‘ifs’.

This is not ageism. It’s not about how old you are but rather about the quality of your product; the consistency of your brand. I don’t begrudge these bands making a living, or extending their careers as long as physically possible, as long as a market exists for their music. But all of these so-called ‘Legacy bands’ face the same problem, if they are around long enough: they find themselves competing with their glory years. Clearly this gets harder as the band gets older, and usually quality suffers. Are UFO ever going to make another ‘Lights Out’? Doubtful, but they soldier on, age and line-up changes be damned, releasing solid records that still carry forward a semblance of the ‘classic’ UFO sound. But purists like me will always compare anything they do to their heyday output. And they just don’t measure up. But all due props to Mogg and whoever’s in his band this week; more power to ‘em.

Line-up changes, in-house acrimony, contract disputes, drug battles, publicized lawsuits, and even original member ratios are other indications that a band may have exceeded it’s expiration date. And nowadays it’s played out for all to see over the internet. Witness the recent public disintegration of Queensryche, in which years of dirty laundry were aired out online for all their fans to see. It was ugly. Every court document, every testimony transcript and legal brief accompanying that drama was available within hours on Blabbermouth. I’m sure this type of thing has occurred hundreds of times over the years but before the advent of the internet, we never knew about it. We were better off. Van Halen were finally able to get to the point of releasing a pretty decent album, ‘A Different Kind of Truth’, after years of very public mud-slinging, trash talking, back stabbing and even Gary Cherone. It’s hard to listen to anything after ‘1984’ after reading Sammy Hagar’s bio, though. Although honestly, it was hard to listen to that stuff before that too. 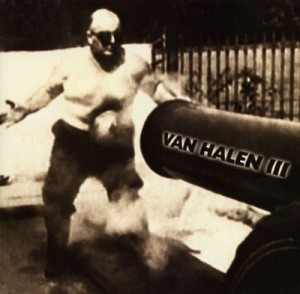 Clearly if bands hang on long enough, sooner or later the members will begin suing each other. Cheap Trick are in the midst of an in-house legal battle; lawsuits and counter-suits are circulating between band members who have been playing together since high school. Pretty sad. Their post-major label records have been of very high quality, and their live show just seemed to get better and better over the years; now this. CT are currently touring with guitarist Rick Nielsen’s son Daxx on drums while the lawsuits simmer. To their credit, neither side has let loose online, and have remained pretty classy about the whole thing. Speaking of classy, Aerosmith had to sue Steven Tyler to get him into the studio and get their most recent record done. How UN-rock n roll is that? Of course the record wasn’t very rock n roll either, despite the year-long hype campaign that insisted that A-smith were working with Jack Douglas (‘Toys’, ‘Rocks’) and getting back to the ‘old school Aerosmith’ vibe. Promises, promises. Even the band members themselves have recently referred to ‘Music From Another Dimension’ as having ‘missed the mark’. Someone tell Aerosmith that if you have to sue a member of your band to get him motivated to work on a record, your band is no longer a band; it’s time to start gardening. News Flash: Corporate board members, business advisors and their legal counsel just don’t make great rock records. Duh.

Okay, so, if you’re not going to break up, maybe a name change is in order? That would have worked for Sabbath; also for Deep Purple more than once. That said, Purple’s latest, called ‘Now What?!’ is among their very best, and does the name ‘Deep Purple’ proud while validating their hanging in there for 45 years. I also salute Scott Gorham for finally coming to his senses (probably received one too many death threats) and changing the name of his downright sacrilegious version of Thin Lizzy to Black Star Riders (an ironically fitting and therefore unfortunate name) just before releasing a record. And then there’s poor old Tony and Geezer, who had to stop calling their band Black Sabbath because Ozzy wasn’t a member, and change the name of the band to Heaven and Hell while they continued touring and recording with Ronnie Dio. As much as I despise puppet master Sharon Osbourne, and love the Dio-era Sabbath albums, I felt good about that name change, and, as alluded to earlier in this post, feel like they should have done it sooner. ‘Cause it’s really not Black Sabbath without Ozzy. Or Bill Ward. D’oh! 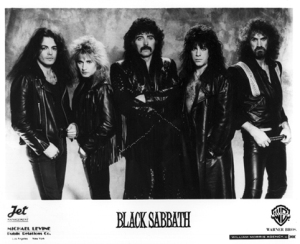 So when a ‘legacy’ band finally does decide to retire, just how long does it take to say ‘Farewell’? Scorpions announced their retirement in March of 2010, and are still on tour today; their ‘farewell tour’ is now stretching past the 4 year mark, with no end in sight. At time of writing they have dates scheduled through March of this year. They’ve released 3 albums since their announcement; none of which are compilations or best-ofs. Goodbye, already! Judas Priest made the same announcement in December of 2010, and played shows right through 2012, though guitarist KK Downing decided to skip the farewell nonsense, indicating that he felt the band was becoming a nostalgia act. A DVD was culled from the tour, ironically titled ‘Epitaph’; ironic because the band refuses to die, and in fact are currently booked to appear at Rock N Roll Fantasy Camp (whatever that is) in Las Vegas this February and March. Priest in Vegas? KK was right. A new JP album will appear in 2014… No one cared about their last handful of records; expect more not-caring later this year.

Kiss has put the ultimate plan in place: Cloning. When you lose members, replace them with younger versions. They did it with Ace and Peter, and I promise you Gene and Paul will do it for themselves too, when they can no longer walk in those platform boots without a cane. 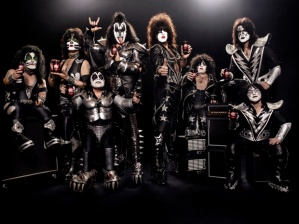 Looks like only Led Zeppelin got it right. But there are a few notable cases of bands keeping it together for the long haul: Thank you, Rush, for hanging in long enough to be around when the rest of the world finally caught up to you, and doing so with your sound, your chops, and your roster intact. Thank you Motorhead, and thank you AC/DC, for showing us how a metal band can grow old gracefully, stay consistent, and command the respect and appreciation of millions in the process. Both bands have weathered major line-up changes, decades of significant trends in popular music, and monumental changes in the music business, all the while retaining their character, their sound and their integrity. We may have just enjoyed the final Motorhead album in ‘Aftershock’, while AC/DC are apparently working towards another record/touring cycle, but it can’t go on forever… that kid in the schoolboy outfit is 59 years old…

It’s almost over, folks; the era of our 70’s hard rock heroes is fading, and there’s no one, I mean NO ONE waiting in the wings to carry the flame forward. Two guys dressed as robots won 5 Grammys this year. That’s the future, folks.

By the way, the guy who wrote ‘Hope I die before I get old’ performed with his band the Who during the closing ceremonies at the 2012 Winter Olympics in London, at age 67.