After the disastrous tour for their ‘Come Taste the Band’ album wrapped in Japan in March 1976, a burned out, drugged out, and generally down-and-out Deep Purple limped back to the UK and quietly died. it was an ugly ending to one of the greatest and most important HM bands in history.

But wait! Deep would return just a few years later, re-grouped and ready to once again take Hard Rock world by storm! YES!!

Oh, wait… Did you think I meant the MkII reformation that took place in 1984, resulting in the Platinum-selling “Perfect Strangers’ album and the highest grossing tour of 1985? Sorry, no. I was referring to the absolute debacle that occurred in 1980, when a handful of small-time west coast musicians-for-hire put together a bogus DP, booked a North American tour and fooled absolutely no one. Sorry.

Our story actually begins with Steppenwolf. The ‘Wolf broke up in 1972, but various versions of the band persisted for decades, in fact right up to this very day. Just between 1977 and 1980, there were 9 different Steppenwolf line-ups, 8 of which featured at least one original member: usually either Nick St. Nicholas or Goldy McJohn. (One line-up included Frankie Banali!) It was during this revolving door period of band membership that guitarist Tony Flynn and keyboardist Geoff Emery became members of Steppenwolf.

Nick St. Nicholas was the last original member involved in this ongoing ‘New Steppenwolf’ fiasco. When he finally left, one would think that was that… But Flynn and Emery picked up the ball and ran with it, assembling another new line-up and touring clubs as Steppenwolf. With ZERO original members. The band consisted entirely of ‘jobbers’; hired hands picked up by McJohn and Nicholas over the years to fill out a line-up and enable the band to tour. Steppenwho??

Emery and Flynn left in 1980, as John Kay started threatening lawsuits. The pair must have made a few bucks whoring around under the Steppenwolf banner, as they immediately set to work forming a bogus version of another classic (and defunct) band: Deep Purple. Emery (who was also a lawyer, which explains a lot) contacted former DP Mk1 vocalist Rod Evans and original bassist Nick Simper to see if either was interested in ‘reforming’ Purple. According to Simper, “Rod phoned in 1980, when I was not at home, so he told my wife I should call him back, which I – in some wise anticipation – never did.” Smart man.

Rod Evans? Not so smart. Evans climbed aboard the phony express and, along with SteppenWTF alumn Dick Jurgens on drums and fellow anonymous jobber Tom De Rivera on bass, proceeded to do business as Deep Purple. Emery and Co. quickly found out the name ‘Deep Purple’ opened a lot more doors (and would potentially bring in a lot more cash) than the ‘Steppenwolf’ moniker, as Evans’ presence lent this project enough credibility that a tour was booked by the prestigious William Morris Agency, and a record deal was secured with Curb Records, an affiliate with Warner Bros. Records. Deep Purple was back!

The New Purps managed about 30 shows in the US, Canada and Mexico before the lawyers got involved. The nightly set list contained Mk I staples ‘Hush’, ‘Kentucky Woman’, ‘Mandrake Root’ and ‘Wring that Neck’, but also several Mk II classics, such as ‘Smoke on the Water’, ‘Highway Star’, ‘Space Truckin’ and ‘Woman From Tokyo’. Mk III’s ‘Might Just Take Your Life ‘ and ‘Burn’ were included as well. But despite the stellar set list, the tour was a disaster. Several stories of near-riots have been related by fans over the years, including this one, posted online by a fan who attended a show at The Factory in Staten Island, NY on July 17:

“I distinctly remember the band coming on stage (although very briefly) sans Ritchie. It was a packed house and the crowd immediately went apeshit and started screaming for Ritchie and within a minute beer bottles started flying toward the band members. It quickly turned into a chaotic scene so I don’t recall for sure, but I believe a few of them were hit and injured. And if that wasn’t bad enough things only escalated once the bouncers tried to intervene…”

In an ironic twist, the opening band that night was a NY group called Samantha; their drummer, Bobby Rondinelli, would join Ritchie Blackmore’s Rainbow later in the year. Another interesting tidbit: The support band for the Swing Auditorium show in San Bernardino, CA was none other than the 9th bogus version of Steppenwolf! Awkwerrrrrrd!

By the time the tour hit Canada, Promoters began billing the group as ‘The New Deep Purple Featuring Rod Evans’. This didn’t stop Evans from making ludicrous statements like ‘Here is one off our “Burn” album’ when introducing ‘Might Just Take Your Life’ in Quebec City. A fan who attended that show posted this online:

“The fans were expecting Ritchie Blackmore not a fake look alike. The fans were very disappointed and started throwing stuff on stage at them. They even tore out theater seats to throw at them. The place was a mess… They almost caused a riot. It was a very bad concert for them and for the ‘Deep Purple’ name.”

It wasn’t just the fans that were pissed about the charade; promoters were also burned by the overwhelming negative feedback that the shows generated. Gary Perkins, promoter responsible for booking the band into Long Beach Arena, said “I feel like I’ve been duped. We just didn’t know what we were getting into. I though the group was more legitimate.” Robert Boulet, who booked the Quebec City date, said “They do not deserve to be paid, it is revolting.” 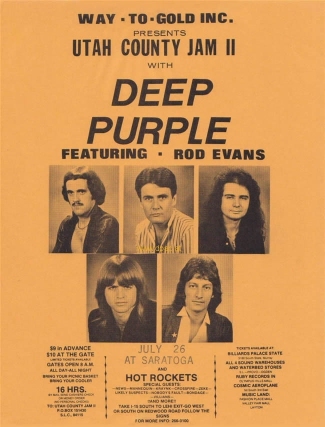 As the tour progressed, the band started feeling the heat. Fake Purple played a festival in Mexico City, where in the band’s defense, Evans claimed in an interview for Sonido magazine that the new DP were using the Deep Purple name:

“In a totally legal form. I was the founding singer of the group and when I decided to form a new one with the guitarist Tony Flynn…. Before this we spoke with Ritchie Blackmore, of Rainbow, and with the people of Whitesnake. And they agreed.”

This proved to be a total lie. Evans changed his tune and sounded defiant in an interview for leading UK music paper Sounds in August, where he stated:

“We haven’t really tried to get hold of Ritchie. Whether Ritchie gives his blessing or not is of no real consequence to me as my blessing to him forming Rainbow would be of no consequence to Ritchie. I mean, if he doesn’t like it I’m sorry, but we’re trying.”

Tony Flynn spoke to a Rolling Stone reporter soon after, defending the sham with:

Evidence to the contrary can be found on Youtube, where footage from the televised Mexico City show can be easily found.

Presenting themselves as Purple had initially proved more lucrative than their previous scheme, but soon enough the Purple hammer came crashing down, and Emery and his cohorts finally found that messing about with HEC Enterprises (the real DP’s management company, who wholly owned the trademark for ‘Deep Purple’) was a different animal than the under-the-table deals with the ageing hippies that comprised the last remnants of Steppenwolf in the mid-70s.

Emery had actually incorporated the new Purps, and had the balls to call the company “Deep Purple, Inc.” Emery also applied for legal ownership of the “Deep Purple” trademark, the status of which he apparently believed was in question. Wrong. Wasn’t this guy a lawyer? This move brought out the big guns from HEC’s corner, and the whole mess was finally aired in federal court in California in 1981.

HEC’s suit against the imposters named Deep Purple, Inc. as well Evans, Jurgens, Emery and Flynn individually. The case was a slam dunk for the real Deep Purple, with the court awarding HEC/DP compensatory damages of $168,03.11, $504,09.33 in exemplary damages, $103,191.52 in attorney fees for HEC Enterprises’ counsel, and $40,782.00 for the legal fees of other plaintiffs (meaning concert promoters who had joined the suit). None of these dudes had that kind of dough, including Evans, who despite singing on Deep Purple’s 4 million-selling ‘Hush’, was skint.

The real DP knew that would never see any of the money. Stopping the bogus Purple wasn’t really about money. For the members of Deep Purple, it was about others cashing in on their years of hard work and creativity. It was about protecting a legacy. Perhaps Jon Lord summed it up best. For an interview in Hit Parader magazine immediately after the verdict was revealed, Lord said:

“The worst part of the whole thing is the damage it might do to our reputation. If we do get back together and decide to tour, what happens if word gets around saying, ‘Oh yeah, I saw them last year at Long Beach, and they weren’t anything like I remembered.’ The name Deep Purple still means a lot to most rock and roll fans, and I mean to see that it stays that way.”

And in 1998, while responding to postings about the ordeal on a Captain Beyond fansite: